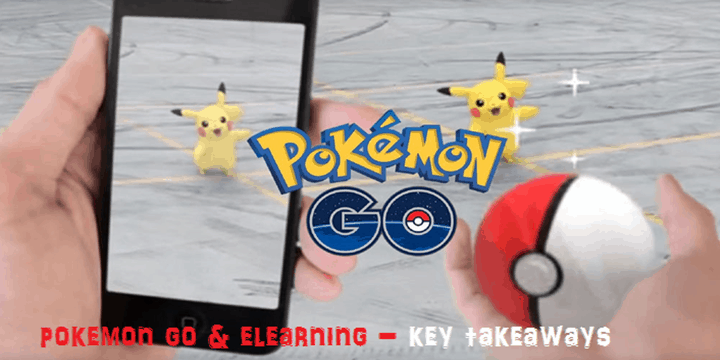 Recently we have been having been witnessing an increase in the number of people gathering at a particular spot for example at the Bus stop near our workplace while waiting for the bus or on the streets while walking or in the shopping mall while shopping, the surprising aspect is that they hardly do the activity which they are supposed to do ( e.g. board the bus or walk or do shopping), they just do something on their mobile screens and walk away, another group comes in –similar actions and it goes on. Out of curiosity one of my colleagues went out and found that apparently that bus stop was a Poké stop. Yes, apparently the Pokémon Go craze has already reached our backyards. And no wonder the eLearning industry is busy discussing about it too.

For those curious to know Pokémon Go is a free-to- play, location-based augmented reality game developed by Niantic for iOS and Android devices. And where did it come from? Pokémon was originally a Japanese anime series that started airing from 1997. It surely had most kids hooked. The basic storyline of the game remains similar to that of the series- the player sets out on the journey to become a Pokémon master for which he/she has Gotta Catch'em All - a tagline clearly from the title score of the original series (watch it here). Watching a game leave such an impact in such a short time is quite amazing which is why the eLearning community has been looking keenly into it too. The thought of creating eLearning that garners such attention is a rosy one indeed.

So what are the key takeaways from the game that can be incorporated into the game?

You might often wonder what's in a name. Well it at least gets the user curious. The widespread fan following that the original Pokémon series definitely was a launch pad for the game's launch and huge positive reception. eLearning should also be promoted well so as to be received well. Which is why we often emphasize on having internal promotional activities before the actual use of eLearning. Based on our experience, we can surely confirm that the success of any eLearning depends on how well it is marketed and how well it is received.

Fun! That's all that this game is about. Collecting Pokémons, earning points, enhancing power, coins evolving Pokémons and most of all throwing the Poké ball right and collecting the Pokémon in one go are all part of the fun elements that the game has. eLearning should be like this too- it should be self-driven, and should inspire the users to keep going on and keep them engaged. Most learning games are designed with this in mind.

Well what is fun without the right colors? Interface does play a crucial role too. Imagine Pokémon Go in Black & White, with next and back buttons- loses its appeal doesn't it? Them why does eLearning have to be monochrome? For the learners to be interested in eLearning, it has to be designed right and being a bit creative doesn't hurt, does it?

Using mobile as the medium is a good idea to begin with as it brings greater reach and freedom to use. To add to this, the use of the common GPS feature in game play, turning common locations Poké stops and gyms, the incorporation of the 'theory of evolution' into the gameplay (oh yes, collecting similar Pokémons helps in evolving them into stronger forms apparently), are all part of the innovation incorporated into the game. eLearning has to be innovative, and technology relevant- focus on these aspects made Spongelab Interactive's History of Biology, a video game a global phenomenon few years back. It was both innovative and interesting, and is still played by many students from across the world.

Walking around, exploring new areas in the vicinity, discovering new locations- in turn coming across some landmarks you never knew about that's a continuous process and it keeps the players hooked. Learning should be like that too. It shouldn't end at one module, there ought to be follow ups, performance support tools, updation reports etc. to keep it going and to ingrain it deeper.

Check out the number of apps that have been launched after the coming of Pokémon Go- it is like a chain reaction of some kind.

For any eLearning venture to be successful, the key is to understand the target audience, their perceptions, knowing the age group can be helpful too at times and then analyzing the kind of approach that will reach out to them and be accepted by them. Most games including Pokémon Go have succeeded in getting this right, which is why they are popular and this is the inspiration eLearning developers need while developing eLearning projects. We at Knowzies always aim at bringing innovation to eLearning and we already have taken a step towards that by creating some augmented reality based eLearning . Hope we continue to surpise our clients with our innovative thinking. Till then Happy Pokemoning 🙂