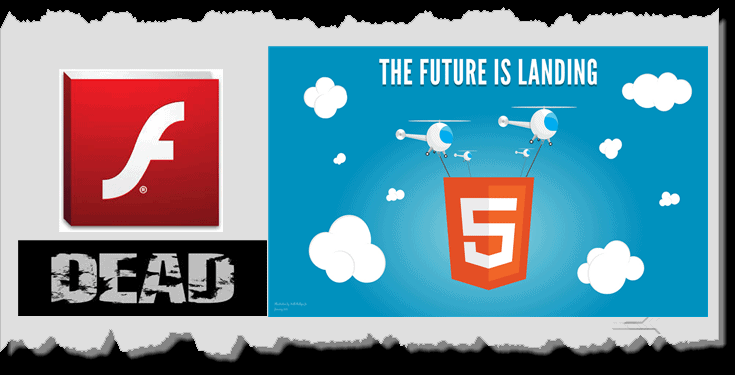 "Change is the only thing that's constant".

This holds true for everything including technology (software & hardware both). One such change that majorly impacted the eLearning industry was the increase in number of mobile devices and the incompatibility of Flash-based courses with those. With more and more employees & employers opting the ease of accessing their work, handling communication and even enjoying recreational activities on their handheld devices, which was soon followed by most organizations openly embracing the BYOD policy, availability of eLearning on mobiles or rather mLearning became a must.

Slowly and gradually Flash started losing its popularity. HTML5 came in as the superhero to save the show. In the past few years, the expiry of Flash has been a topic of major discussion in the eLearning circle. Many industry experts have sighted their opinions on the same too.

Flash had reigned the eLearning design since 1996. Its popularity mainly due to the video content, and high-end animation it could render, and of course the fact YouTube used Flash was a plus. However, it failed to cope up with the changes and advancements as it should have. Some of the factors that led to it its slow demise in our words are:

Though it's unfair to blame it all on a letter, the fact is that it did trigger a huge controversy. The actual reason that lies hidden beneath the surface is that Flash had failed to look at the expansion in the device types. It had always been a desktop-first platform and remained the same, making it nearly impossible to utilize the courses created using Flash on mobile devices and tablets. This was back in 2010, and by 2012 the world had already become multi device.

This applies both to the increasing number of handheld devices in different sizes and makes and also to the different number of browsers that came in. At first most browsers did support Flash, but gradually with the coming of HTML & HTML5, many browsers stopped supporting Flash. According to Wikipedia, "Opera versions since 10.5 feature native Flash blocking. Opera Turbo requires the user to click to play Flash content, and the browser also allows the user to enable this option permanently. Both Chrome and Firefox have an option to enable "click to play plugins". In June 2015, Google announced that Chrome will "pause" advertisements and "non-central" Flash content by default."

In early 2015 came the major blow, YouTube dumped Flash in favor of HTML5 as its default web player. A strategic change for You Tube that was now being regularly accessed by millions of people across the globe, this change however greatly empowered HTML5 which would now be You Tube's default on Chrome, IE 11, Safari 8, and Firefox beta.

This didn't come as a major surprise, but it was indeed a major step for Adobe when it killed its Flash Player for Android and the BlackBerry Playbook. Adobe also made the statement that, "HTML5 is the "best solution for creating and deploying content in the browser across mobile platforms." In December 2015, Adobe embraced the power of HTML5. Flash aka Flash Professional was dead and resurrected as Adobe Animate CC. The new version of Flash uses HTML5 to reach millions of devices.

Apart from the facts stated above, security issues highlighted even by Facebook chief security officer, SEO related issues, the coming of interactive videos and other insignificant factors also led to what we can otherwise call Flash's expiration. After all everything has a shelf life, doesn't it. This has led towards an increasing demand for conversion of legacy flash-based courses to HTML which is facilitated by most eLearning vendors.

Conversion of courses from Flash to HTML, or creation of eLearning in HTML5 are sure short ways of keeping your eLearning future ready. So, why not consider the options today? We are eager to hear your thoughts.

Read More
Microlearning for Banking and Finance
By Amol Shinde

During the last few years, the top 5 sectors with highest number of employment have been banks, IT, mining, healthcare and textiles. According to Statista, “in 2017, the total number of people employed in financial services sector in the UK amounted to over 1.13 million.” There’s nothing wrong in stating that banking and finance sectors […]

Read More
The Importance of Training Evaluation
By Ashutosh Joshi

What is the Importance of Training Evaluation? Why Evaluate Training? Read more to find out why it is important to evaluate every training.