Is Authoring Tool Know-how a Must for Instructional Designers? 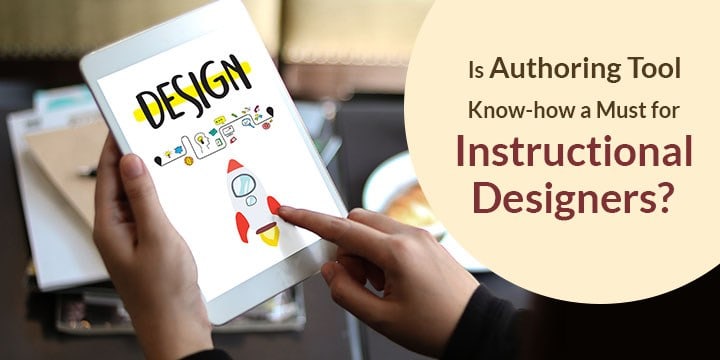 We often consider the Authoring tool for Instructional Designers to be the all-rounders, the people behind the screen who sort of make eLearning happen. While they are the brains behind the content presentation, flow, and most importantly how the learning is imparted, are they a part of the development too? To a great extent yes, not that IDs essentially know development language and such (there may be exceptions), but mostly their involvement is restricted to the guiding, error finding and content correction part. Or at least this used to be the scenario until authoring tools came into picture.

So, what about Authoring tools? The main selling point for any authoring tool is that it is designed for the user’s convenience. The user pool here includes not just the developers but the IDs and even the L&D professionals (and those with the inclination to be involved in actual production). So, using an authoring tool doesn’t require knowledge about coding or designing media elements. The interface is usually intuitive (almost similar to using PowerPoint) and hence is quite easy to use.

So, ideally for using an authoring tool the IDs don’t have to be a high- end developers. But, what if the client demands customizations or added features that call for tweaking at the programming level? That would call for a specialized developer and last moment requirements like those often tend to take a toll on the entire production (cost, effort and manpower included). In organizations where IDs have to handle course design and development using authoring tools, knowledge of basic level of coding becomes almost a necessity, as the development is handled in-house and that too without the involvement of any developers in some cases. In such cases know-how about the authoring tool in use becomes a mandatory requirement.

Many eLearning providers utilize pre-designed templates so that the IDs have a framework to build the storyboard around. In such cases both the IDs and the developers are aware about the way content can be molded, modified etc. This arrangement exempts the IDs from getting into the coding aspects of the authoring tool. This strategy is often used as a part of the AGILE/ADDIE/SAM development to reduce the turnaround time and the budget.

But, can IDs always work their way around the software/tool without knowing and understanding how it works? The current industry scenario says otherwise. For IDs to design eLearning that fits the media, technology requirements of today, knowing a bit better about the tools available in the market, how one differs from the other and also how each authoring tool (at least how the more popular ones) works. This can help in identifying the best authoring tool, incorporating design elements, audio-visual elements into the User Interface that fits the learning requirements.

IDs who don’t understand the tool, are often unable to measure its capabilities and fail to see the ease it provides in certain aspects and its limitations too. Which in turn may make the work quite difficult for the developers. On the other hand, would it work without IDs?  L&D professionals who know how to operate an authoring tool, may have no clue about designing for eLearning. The end results may often be almost similar to PowerPoint presentation with next and back buttons. This is not exactly the kind of output expected and so, the role of IDs remains crucial.

On the longer run and looking at the bigger picture here (i.e. eLearning service providers have a process that involves different people handling different roles), the IDs may not be experts at handing the authoring tool nor have in-depth knowledge in coding, but knowledge of authoring tools is essential to ensure that the work is handled seamlessly and hand-to hand with the (instructional) developers, graphic designers and the LMS team.

However, the debate is still open and so, do share your opinions.