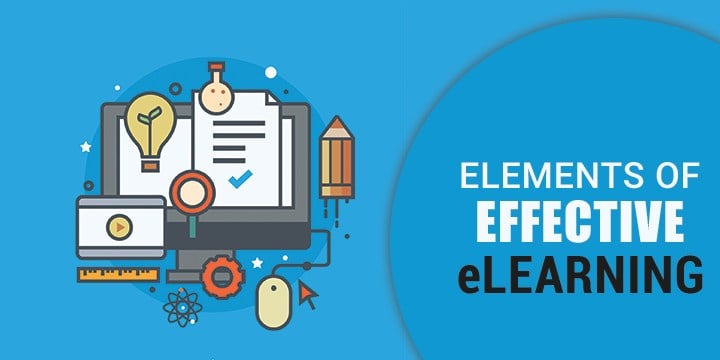 eLearning is no longer a buzzword in itself. It has been replaced by various other terms such as, mLearning, micro learning, personalized learning etc. to name a few. But, the one that is of more interest these days is a term ‘Effective Learning’.

In the days past, the word effectiveness was often associated with the end results of eLearning, though the meaning still remains the same, the word now even influences eLearning design, learning pedagogy. The effectiveness of eLearning essentially starts right from the step of conceptualization. Learning and training methodologies have changed over the years and so has the nature, the attitude of learners. It is no longer a unidimensional function, but a multi-faced one that is closely affected by many external factors.  Many learning developers have studied various aspects of eLearning, its impact on effectiveness or engagement as we otherwise call it. Inferring from a few such studies, here’s our own list of elements that compose an effective eLearning.

Some even say that an eLearning is only as good as the activities in it. This isn’t something new, this is what J.B Biggs mentioned in his book-Teaching for Learning: The view from cognitive psychology, “the more ways in which the learner is involved in task related activity, the stronger the learning”. Actions however, should create an experience that can be remembered or implemented in most cases in order to call it effective. Pointless interactivities, and meaningless buttons may tend to lead to frustration rather than learning if overdone. This element of eLearning should be incorporated with at most care and planning. Also a due care must be taken for new age learners specially millennials since they have a very different way of navigating things than in a very traditional way.

We tend to look for meaning behind various actions, stories and such. It is the same in case of eLearning. An effective eLearning module should be designed using real-world examples to explain concepts. However, it doesn’t have to be real examples always, it can also be stories, role plays, case studies,  and well-designed simulations.

Feedbacks are essential elements of effective eLearning. It does a lot of things, analyses learner satisfaction, finds areas that need improvements, and though explanative feedbacks are rarely used it could also mean gathering inputs about what works and what doesn’t. Automated feedbacks help in saving time. Feedback can be built during smaller intervals and could be in the form of knowledge checks as well.

eLearning and content sure go hand in hand, but what about the context? The context can actually be inferred from the initial requirement analysis. It should ideally cover at a broad level the device infrastructure to the learning needs. Those elements give eLearning a context. After all a well-designed eLearning that doesn’t fit the context would be little or in reality not that effective.

At the end, it all boils down to this one element. The influence/effect of eLearning on performance or behavior. eLearning design should take into consideration its long-term/short-term effect or impact on individual learners, as well as the overall environment or the organization in general.

The actual elements of eLearning can be anything from video, simulation, interactivities, images, to games and game elements. The points mentioned above are elements at the generic level without which the effectiveness of eLearning would highly diminish. Effective eLearning design depends on the optimal utilization of all those elements.