10 UX Designing Terms You Should Know as an eLearning Professional 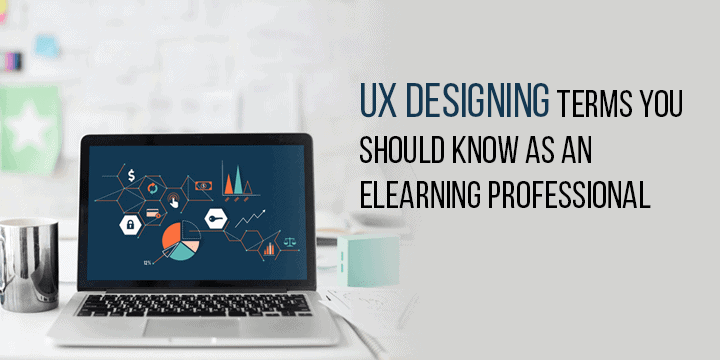 Think ten years back and there’s no denying that life was simpler then. The devices were simpler, the markets and everything in it. Not just that even language used to be simpler then. Not to sound like an hexagenerian but adapting to the urban lexicon and internet slangs has become an every day task now.

How otherwise can we afford to understand this conversation? “Girl, this is fun, ROFL. I was BTD till now. Come and you will be BWL.”

ROFL here stands for Rolling on the Floor Laughing, a common one. Curious about the rest? BTD stands for ‘Bored to Death’ and BWL stands for ‘Bursting with Laughter’. Not knowing those acronyms often makes it difficult to decipher messages. eLearning professionals too often encounter such a situation when they fail to understand the acronyms and terms used in UX (User Experience) designing. As it’s always better to learn than being clueless, let’s look at 10 commonly used UX designing terms that any eLearning professional should be aware of.

The list doesn’t end here though. There is Responsive design, a term you are all well aware of. Avatar, and other terms like Bug, Cache, Emoticons, Front-end and Back-end development, Hybrid App, IP address etc. that are popular terms too and this list is only expanding by the day.

So, next time you recognize something out of this list, you know that you are now one step ahead in the game. But the learning as always shouldn’t end here. So, keep reading and look out for this space for new updates.